What an exhilarating day! Yoel made us some lunches and drove us to the trailhead. This was the day we were going to tackle Vardit and Barack canyons. The guidebook says the canyon walls are steep and 70 m high “you will climb vertically up a ladder with the help of metal rungs and handholds.” And so it was. it was scary but the smooth rocks were stunning. Some of the pits were flooded. At one point the water was deep . A rope had been strung across which we attached our packs to with carabiners. (I left my big pack with Yoel who was going to meet us at the campground afterwords and Arlene left most of her stuff in a green garbage bag but we still had our electronics and shoes…) We had to remove our clothes and walk through icy chest deep water – rather green from algae – to the other side ( an interesting photo op), slither up onto the rocks and re bandage my toes, then climb up the metal ladders through the canyons and maneuver up metal runs.

It was terrifying and exhilarating at the same time. We had just got our boots back on when a group of five guys came by. I imagine they had to do the same thing. Anyway we were long gone before they were done. Between canyons was a 5 km walk across the most fabulous plateau.

The type of countryside I love – desert, bare high country with the Jordanian mountains off to the west. The second canyon had a narrow path on the edge of the DEEP canyon – not a walk in the park for someone who gets dizzy easily. We followed a group of four Israelis down into the depths of the canyon, down ladders and sliding down water water smoothed rocks and forded a knee high pool.

When we exited the canyon, the brilliant blue sky against the rock walls was incredible. 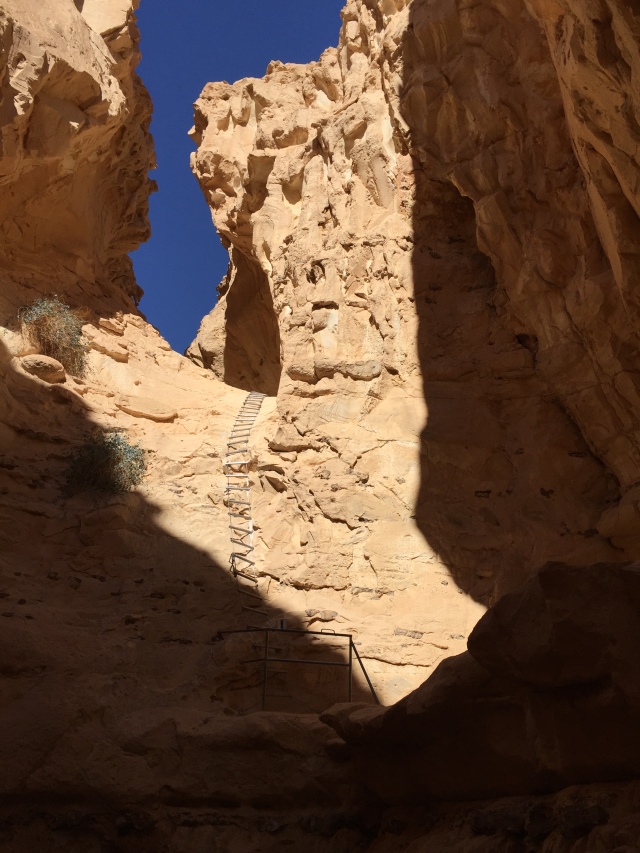 The Israelis were perched on a ledge eating fruit and chocolate. a couple of them, including one guy who made travel videos and look like a young Brad Pitt, were in the tourist business. We sat with them for half an hour, drank a bit of herbal tea made from a local dandelion like plant and shared their snacks. They were very curious about our trip and suggested getting a bag service so we could ditch the packs ( which I would love to do but have since discovered is outrageously expensive. Their main advice: it is about the journey, not the mileage enjoy, stop and smell the roses. They seem to be suitably impressed by 2- 50/60 women attempting The Shvil. They were also quite surprised to hear we thought the trail was dangerous. One of the young men said we need to redefine what we consider dangerous. He didn’t explain but I think for Israelis, their existence has been contested for centuries and THAT is danger. Facing challenging landscapes, especially in a land they love, is not in the same class at all. That is the best I can figure it because there isn’t a person I know who wouldn’t be shocked by some of the obstacles on the trail, and yet very few Israelis seem to understand our apprehension. Strange.

Arlene and I started walking out of the canyon down the wadi to the campground but it was about 10 km! Thankfully that merry little party picked us up about 3K into the hike and drove us to the campground. They picked another couple hitchhikers up who sat up on the roof racks. Respectful, lovers of nature, mellow… Maybe it was the tea??? But what great people. So again we were looked after, arriving at the campground before dark, when it could have been a long slog over rocks in the dark (our headlights were back in our packs. ) We made a fire and kept it going, joking that we didn’t want to be huddled in the dark looking pathetic when Yoel arrived with water and the bags. They came around eight, hugs all around, invited them to Canada, – anything we need they said, just call. Such a surreal Can’t help but feel thankful for this experience. Would love to be posting pictures but I need Wi-Fi to get the pictures from my camera to the iPad or phone. No Wi-Fi yet . I think may be Arlene will post one or two on her blog. 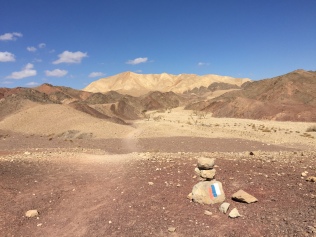 3 thoughts on “The Canyons”