The peripatetic pen is no longer so peripatetic, though it does wander around Edmonton with me. I arrived home last Sunday, compliments of KLM.  My knee actually feels pretty good, which leaves me  bemoaning the fact I’m not in Israel. I have to remind myself that at the time, the decision seemed to be sound, given the weight of the pack and the condition of Arlene’s ankles.  Since coming home, there’s been  a couple of very blue days and four episodes of sleeping  12 hours straight (more to do with the grey weather and lack of stimuli than actual fatigue). I’ve been to Mountain Equipment Co-Op and purchased more freeze dried mountain meals so the aroma can take me back to desert canyons and star filled nights.

Now that I’ve semi-recovered, my pen and I have decided to carry on blogging. I miss the Shvil and everything associated with it:  the thrill of the unknown, the mystique of the trail, my travel buddy, even the painful bits. I may not be in Israel in body, but I am certainly there in spirit, following Arlene as she heads north and east on her troublesome ankles. The blogs which follow stem from a pathological need to continue the adventure.

After leaving the archaeological site at Caesarea, we walked up the beach a bit further. The sand was wet, making the walking easier. After an hour or so we came to Nahal Taninim. A nahal, if you remember, is a stream bed or wadi. Nahal Taninim once was the alligator capital of Israel. In fact, the name Taninim means “alligator river”. According to the trail guide, the last alligator was killed here about a hundred years ago. This is another example of a serious omission in the trail guide. No sooner had I hitched up my capris, tied my trusty boots to my backpack, and stepped into the cold and fairly dirty water, I felt it. The swish of a scaly tail brushed against my bare leg. My heart raced, but I reassured myself that alligators had not inhabited  this river for nearly a century. I felt it again. This time I saw the shadow of a long reptile beneath the surface of the water. Arlene, who was gingerly stepping on rocks behind me on her sore feet, hadn’t noticed.  Thinking I was imaging things, I flung my hummus covered pita in the water  towards the opposite bank of the river. It floated for a second before the great jaws lifted from the muddy water and snapped up the bread. Those jagged teeth were definitely not a figment of my imagination. Alligators remained alive and well in Nahal Taninim! I screamed for Arlene to get out of the water, and in her confusion she slipped on a rock, saving her electronics with some fancy foot work (despite the sore ankles) I was in the middle of the river, which was about 12 feet across. What to do? The alligator was swimming  towards me. Was it going to try to pull me down and roll me in this nasty smelling water, just as I’d seen in the movies? Or would it just bite off a limb, sending my blood swirling downstream into the Mediterranean and leaving me wishing I only had a strained knee to complain about?  I decided to turn around. There is safety in numbers. I hurled more pita towards the opposite bank, as well as an orange I’d stuffed in my pocket. In my panic, I also threw my container of sun block and a full Nalgeen  bottle at the beast. The creature grunted in annoyance as the heavy plastic nicked the ridge of his crusty eyes. Stumbling to the bank, I grabbed Arlene.

“Did you see that? Did you see it?” I yelled.  She nodded, pointing to the streamlined body of the alligator lurking near the bank closest to us. Then, because Arlene is not one to be cowed into inaction, she picked up a large rock, climbed onto the grassy overhang above the bank and dropped that sizeable  sphere of quartz on the alligator’s head.  We grabbed our bags and slip-slid across the river trusting that the water was not infested with the creatures. Surely if had been, someone would have posted a warning!!  As we reached the north bank we saw the alligator bobbing on the surface of the water, floating aimlessly in our direction, looking dazed. With trembling hands, I took its picture just before it sank to the bottom – proof positive that alligators are alive and well in Nahal Taninim. 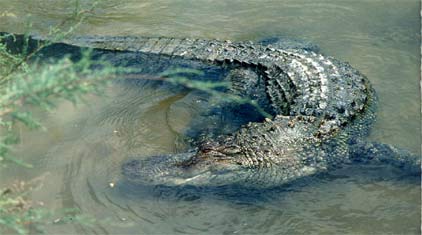 After drying off further up the trail, we wondered if we should notify someone. Sooner or later some other hapless hiker would follow the trail across the wadi, where a very antagonized alligator might be  awaiting  its dinner.  But we had just consumed a full box of halva, and were too sated on sugar to care.

From here, the trail heads along the coast to an Arab fishing village, then turns east towards the Carmel Ridge, where Elijah supposedly tangled with the prophets of Baal. What other adventures lay in store for us, we wondered, languidly laying back on the grassy slope, feeling the warm Middle-Eastern sun melt away the trauma of our reptilian encounter.