The rabbis went down to the watering hole, and we carried on up highway 90 along the Dead Sea. Our first ride gave us a lift to a junction outside Jerusalem. His driving left a lot to be desired. Flying around hairpin turns while trying to get his GPS working. No need to dwell on that. Makes my scalp prickle thinking about it. We walked over to a bus stop where a soldier said the bus into Jerusalem would be there in 5 minutes. Not so. We waited over 20 minutes in the blazing sun until Arlene decided she’d stick out her thumb and see what happened. First car through the light stopped, and the driver took us within a few blocks of the Abraham hostel.

This hostel is big, roomy, big kitchen, full breakfast etc… A couple of older American women shared our room, one who was exploring the Jewish faith ( and an Internet romance) , the other exploring her independence.  We got there 3 hours before check-in but we were able to shower and use the laundrey. We towelled up and thew everything we owned into the wash. So pleasant to wash off all that salt and get into pliable clothing!  The staff was concerned about our sore knee and ankles and did everything possible to make us comfortable. We enjoyed a couple days of fame. Seems everyone knew about the injured women from the Shvil.  “Oh, you’re the ladies from 227!”  My knee is actually starting to feel better. I’m walking more freely and it hurts only slightly to bear weight. Arlene on the other hand, was suffering.  Here, she could ice her heels and get off her feet. The second day in Jerusalem ( Thursday) was cold and rainy so we didn’t even venture out, except in the evening to explore the local open market. Arlene’s  heels were killing her by the time we got back to the hostel.  Thursday was also the day of Sabrina’s surgery back in Ottawa.

Today we explored the old city of Jerusalem. We started with a free tour but lost everyone somewhere in the Armenian quarter. And as a result Arlene had her pants fixed! We stumbled across a tiny tailors shop and the owner, who had run the same shop for 57 years was eager to chat. He sewed up her pants for the bargain price of 30 shekels. Seeing her wearing pants without a gaping backside seems sort of…unnatural.

We explored the winding cobblestone alleys and the narrow market maze, which

seemed to radiate into all 4 quadrants of the city: Armenian ( orthodox Christian), christian, Moslem, and Jewish. We went to the Church  of the Holy Sepulchre, the site of the crucifixion and were both inexpressibly moved by the slab of rock where 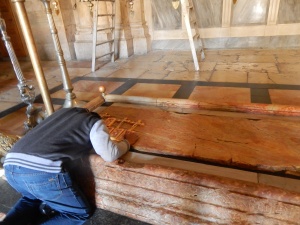 Jesus was laid out and washed. The church is built around the hill where the crucifixion took place and it is obvious it has significance to Christians, Jews and Moslems alike. What struck me was that 40,000 people live and work in the old city of Jerusalem, side by side, and appear to get along well. Outside is a different story. We’ve heard news stories about attacks, mainly on soldiers and security forces in the last few days.  We regularly see people in uniform and out of uniform with AK 47’s hanging 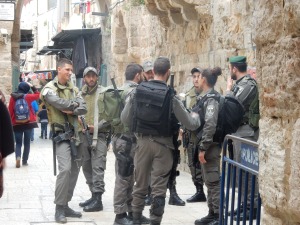 casually from their hips.  On the other hand I haven’t heard of anything more than random stabbings, which is quite different from the American style gun massacres so often in the news. I planned on taking a full day tour of the West Bank – Bethlehem, Ramallah … but decided not to, not because I felt unsafe, but because of the cost ($150).

The Temple Mount and the Dome of the rock are visible from the western wall ( wailing wall) .  Because it was the beginning of Shabatt, preparations were 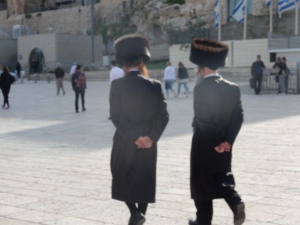 underway for the feast and traditional Jewish dancing that take place in the courtyard beyond the wall. We took the opportunity to place our hands on the wall and pray. When done, the custom is to back away from the wall, rather than turn one’s back on it. As Arlene was backing away she bumped right into the woman she met at Toronto airport who was connected to the shelter hostel in Eilat (where we started and mentioned in an earlier post)  such a small world !! Turns out they were also in Eilat when we called to say we couldn’t find the water John had cached for us. Sandy and her husband have kids in Edmonton so I think we will meet up some time in the future.

By about 4:30 Arlene downed another pain pill to prep for the walk back to the hostel (1.5 km only)  as the tram and buses had stopped running (Shabatt). My knee is definitely on the mend. Haven’t had a pain pill for a couple days and walking is much easier.

We’ve decided to change the fancy hotel gifted to Arlene by one of her Jewish clients to tomorrow night and I have a rental car booked at the ridiculously low price of 10.00 a day for Sunday afternoon. Wonder what the catch is?  I’m still uncertain about the last few weeks of this trip. Will the knee hold up under the weight of the pack and the strain of the terrain? Will Arlene’s feet prevent her from walking and will she have to just camp somewhere warm for days at a time. Sometimes we think we could get back on the Shvil and walk a bit, even if only a few kilometres a day, but I’m a bit wary of reinjuring my knee once I’m carrying an extra 40 pounds.  A dr’s note will get me a free plane ride home. Decisions, decisions.

Sabrina had a rough night post surgery. Ben is flying down to see her on Wednesday for a few days. Rachel is in South Carolina with David checking out his new niece. Next weekend she goes to her ex roommates wedding near Seattle. No grass is growing under that girl’s feet!  If anyone is interested in  reading my interview, you can go to  malahat.ca. It came up on the website yesterday.  No other news, though I did lose the first of 4 damaged toenails.  Came off in the shower at the hostel. Oh well, the other 9 are hanging on. I’d actually forgotten all about the dismal state of my feet, having gotten accustomed to my completely numb big toe. Cheers to everyone. Shabbat shalom.

One thought on “On to Jerusalem”