A very hot day. At least 30c . We carried on over the plateau, came across several 4×4 trying to make it up one of the steep ascents. Lots of people headed out to the Dead Sea as this is almost Shabbat , the Jewish weekend. One guy spoke French, another gave us some extra water which came in very handy. They took our picture.

Eventually the plateau descended into a series of wadis – expansive wadis that seemed about 1/2 km wide in places. It was almost impossible to find the trail signs. But the trail guide steered us in the right direction, north and it was with relief that we saw those comforting orange, blue and white stripes. The effort of walking over jumbles of stone through the wadis with a painful knee, in the heat, was very trying. I had to take a break under a rock ledge and cool off. ( poor Arlene having to put up with all my aches and pains. She’d have  been off in a cloud of dust, probably in Arad by now, if not for me slowing her up! this journey is a lot about endurance – for me physical, for Arlene, patience.

I prayed for a breeze and we got one. The wind blew up by about 3:30, and turned into wild, blustery blasts that nearly knocked us off our feet at times. We walked through the rock strewn wadis  until almost dark. At times we were surrounded by cliff walls, then rocky hillsides. There was green on those hills and I think Arlene mentioned some if the landscape reminded her of northern Scotland- an impression I also had. Bedouins grazed camels and sheep on the hills. Must say they seem to be a scruffy, rather mean lot. (The bedouins, not the animals)The kids make lots of weird vocals ( to the animals perhaps??)

Where to camp? Nothing like a pile of boulders to try pitching a tent on. Then we discovered a cave- deep enough to be out of the wind but still lots of air, large enough for our gear and two mats and sleeping bags. Another trail fantasy fulfilled ( we’d read about this in the walk the land book)  the wind had turned cold and the cave, which was the only one we encountered that day or the next, for that matter, was providential. We treated ourselves to a freeze dried meal and went to sleep – warm for really the first time at night. Again, my knee was ready to give up the ghost, but ever hopeful, I dreamt of a miraculous recovery overnight. 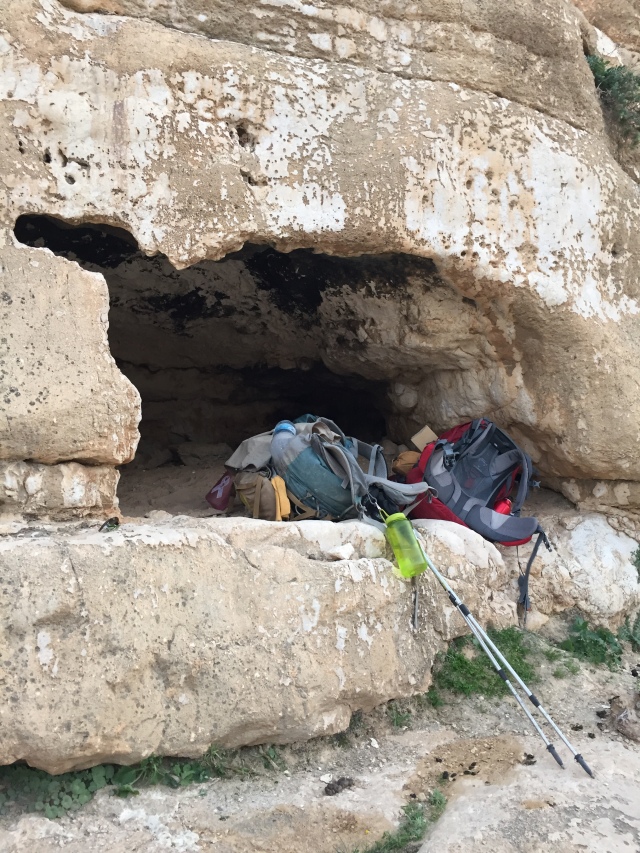